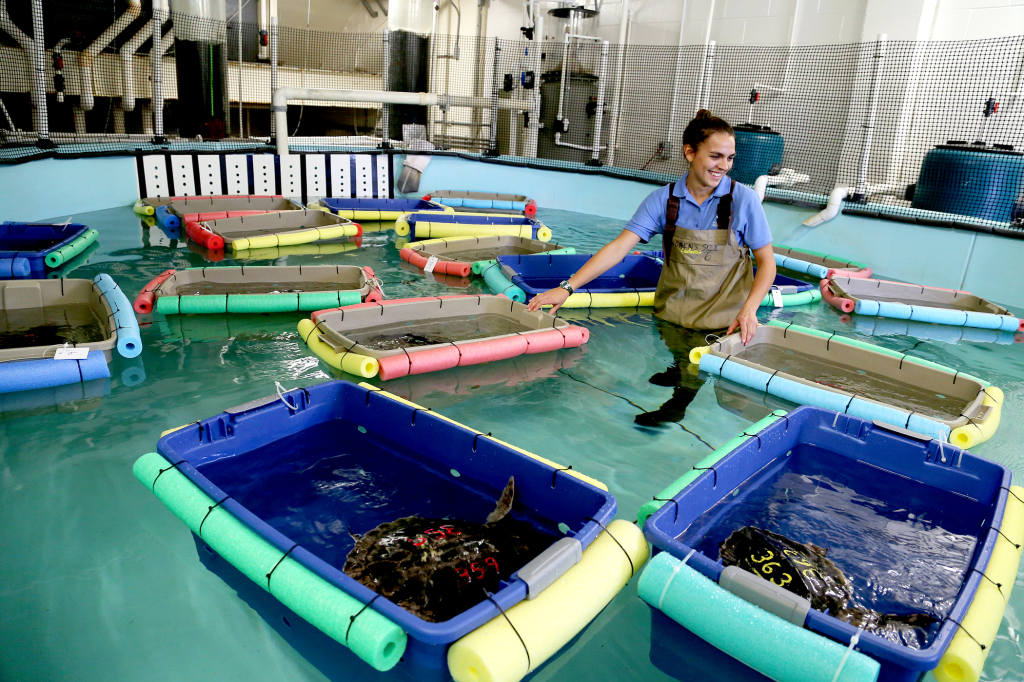 Welcome back and Happy New Year! Our first blog post for the year features some special guests at the Aquarium. Right now, the North Carolina Aquarium at Fort Fisher is caring for nearly 20 endangered sea turtles. The sea turtles were injured in a mass cold-stunning event along the New England coast and transported to North Carolina just before the Thanksgiving holiday.

More than 1,000 sea turtles were rescued after becoming ill from spending too much time in cold water temperatures in the near-shore waters of the northern Atlantic. Sea turtles are reptiles and cannot control their own body temperatures. Cold-stunned turtles become lethargic, experience decreased circulation and heart rates and may die. When this happens, they may become ill, be attacked by other animals or end up with infections. Serious cuts may occur if the animal is washed ashore. Eye injuries and weight loss are also common. The high number of rescued turtles requires partnerships with wildlife organizations and aquariums around the country offering space and resources to care for the sick animals. We agreed to care for Kemp’s Ridley and green sea turtles. These turtles are small juveniles. 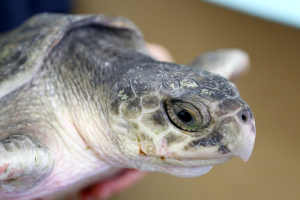 “The Aquarium is not a sea turtle rescue facility,” said Aquarium Director Peggy Sloan. “A cold stunning event of this size, however, greatly impacts these vulnerable animals. We all agreed our expert staff could assist in this crisis and do whatever is needed to save these sea turtles.” Aquarium staff are providing the turtles with daily care, special diets and keeping a close eye on them.

Cold-stunned sea turtles occur in the coastal waters of North Carolina, as well. The public may encounter turtles floating in the waterway and around marinas, they may find them lying motionless along the beaches or salt marsh shorelines. Even though a sea turtle may appear to have no signs of life, it may not be dead. Anyone who finds a sick, injured or dead sea turtle should contact the N.C. Wildlife Resources Commission Sea Turtle Stranding Network at (252) 241-7367.

When we received the call that we would be hosting a large number of cold stunned turtles, the staff sprung into action to get ready. I was sent to the store to purchase pool noodles. I got some funny looks buying noodles in November 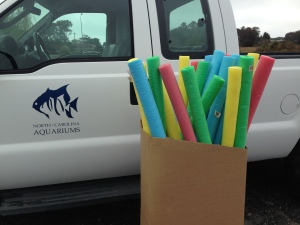 Why would we need pool noodles? We needed a place to put the turtles to keep them separate from each other but help them stay afloat since they were so sick. So our staff designed private enclosures for each of the turtles. 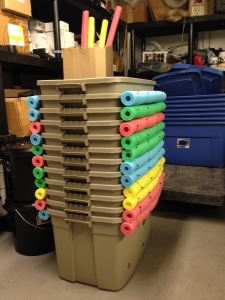 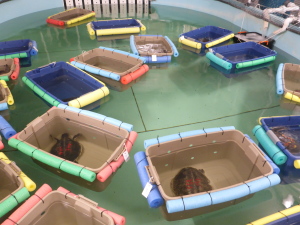 Turtles in their new homes

Having so many turtles at the Aquarium involves a lot of time and energy from the staff. Today I was able to help care for the turtles. Each turtle is released into a large tank so they can get exercise. We monitor their swimming and diving patterns to make sure they’re doing well. 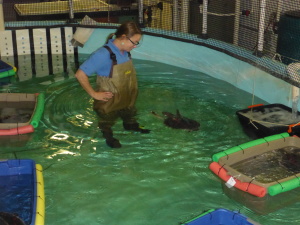 I’m having a moment with one of the turtles.

While they are out of their bin, we clean up any turtle poop that may be floating around. 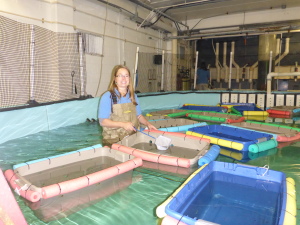 Once they finish swimming they are returned to their bin and fed a mixture of fish and squid. Like our loggerheads, they receive a percentage of their body weight to eat. 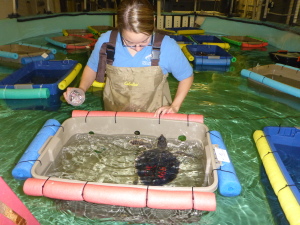 Thanks to the hard work of our staff, yesterday our vet team from NC State University approved 13 turtles to be released into the Gulf Stream by the Coast Guard soon.

If you find yourself at the Aquarium over the weekend, check with the front desk as we may be offering behind the scenes turtle tours. A portion of the tour fees will benefit Aquarium conservation efforts. The Aquarium receives no additional funding or staff to assist in the turtle care.

Our loggerheads have been growing over the holiday break and are doing well. Here is their progress to date:

Not sure what to do with this weight and length? Learn more in our Hatchling to Yearling lesson plan. If you have adopted a turtle for your class, look for an updated photo in your email soon! Check out what Ms. D’s Mateys in Port Lambton, Ontario put together to celebrate the turtle’s Hatch Day (August 15): 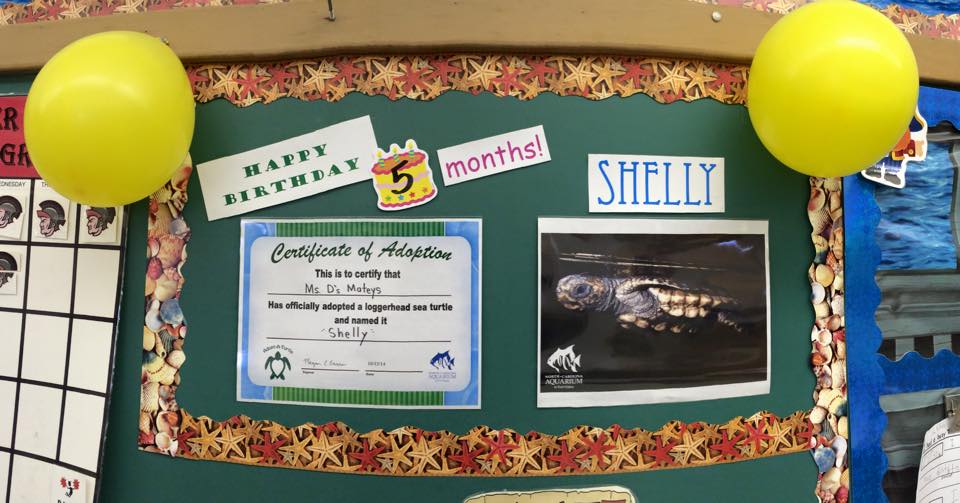 We are super excited to see how you are using our curriculum. Share your photos and you may find yourself featured in our blog! If you would like to adopt a turtle, you can do so on our Adopt a Turtle page. 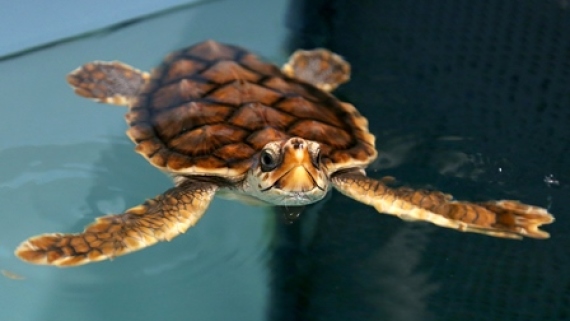 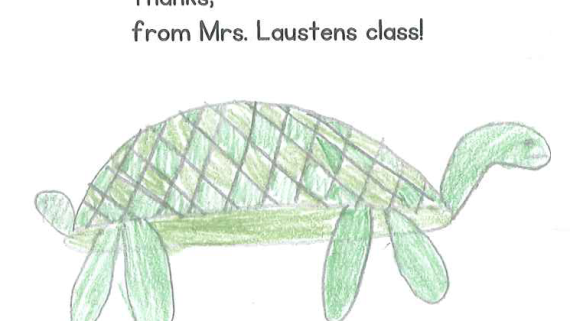