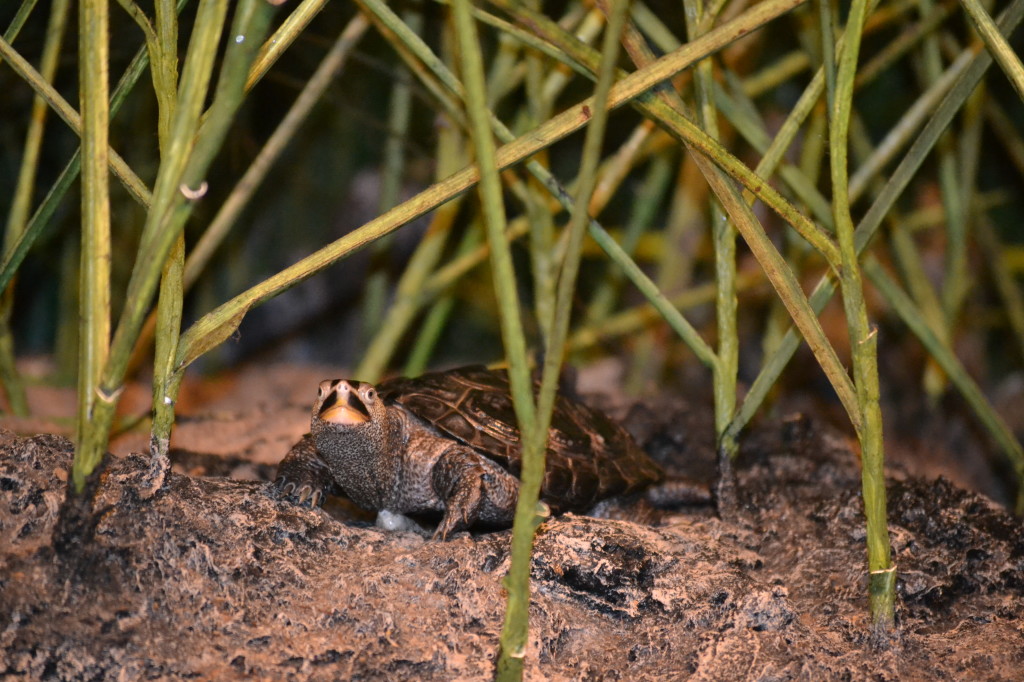 This week we are interviewing Sarah, a local Biologist that works with sea turtles and terrapins. 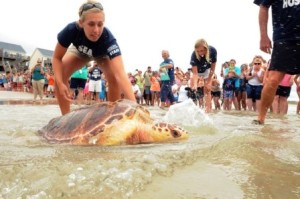 Sarah is a local biologist that works with both sea turtles and diamondback terrapins. Here she helps release a rehabilitated sea turtle.

Q: What is your job title and some duties that you do?

A: My name is Sarah and I am the Coastal Wildlife Diversity Biologist with Wildlife Resources Commission. My main duty is to serve as the Sea Turtle Stranding Coordinator for North Carolina. I also assist Dr. Matthew Godfrey in coordinating the Sea Turtle Nesting Program. I also help with monitoring and management of other coastal reptiles and amphibians, including gopher frogs and diamondback terrapins.

Q: How did you first get interested in sea turtles and terrapins?

A: Growing up in Ohio, I had never even seen sea turtles (except in books or on the Discovery Channel). I was fascinated with the ocean and how different an environment it was from what I was used to. I knew I wanted to study ocean life from a very young age. I became interested specifically in sea turtles when I was an undergraduate at Ohio Wesleyan University, majoring in Zoology. I was writing a research paper about leatherback sea turtles. I saw my first sea turtle in the wild while on a class trip to the Galapagos Islands. I was snorkeling and saw this big, beautiful green turtle flying through the water past me; I was hooked! My interest in terrapins came later, after moving to North Carolina for my Master’s program at Duke. I began to learn more about North Carolina wildlife, including diamondback terrapins. I had no idea how beautiful and unique they are. Some consider them the “other” sea turtle. They are not actually sea turtles, of course, but they are the only species of turtle in North America to live exclusively in the brackish waters of the estuarine environment. Part of my duties as a diversity biologist with the Wildlife Resources Commission is to monitor priority species in North Carolina, which includes terrapins. We know relatively little about how terrapin populations are doing in the state, so I thought it was important to try to fill in those data gaps.

Q: What are some of the similar issues that both sea turtles and terrapins face?

A: Historically, both terrapins and sea turtles were harvested for human consumption, which had negative impacts on their populations. More recently, habitat loss due to human development has played a bigger role. Terrapins nest in sandy areas on the back side of barrier islands, while sea turtles nest on ocean-facing beaches. As humans moved in and developed these barrier islands, roads and homes were built, often right over prime terrapin nesting habitat. In some areas, female terrapins in search of good nesting habitat are run over by cars as they try to cross causeways on barrier islands.

There are protections in place in North Carolina to protect dunes and ocean-facing beaches. Quality sea turtle nesting habitat still exists, but sea turtles encounter issues with beachfront lighting. Nesting sea turtles can be deterred from nesting if a beach is too bright with artificial light. Hatchling sea turtles on the other hand, are programmed to crawl toward the brightest light (naturally this is the moon). They can become disoriented and crawl the wrong way towards artificial lights, rather than towards the ocean.

Both terrapins and sea turtles can become entangled or trapped by various fishery operations, which is known as bycatch. Terrapins in particular can become trapped inside crab pots and drown.

Q: What is the Terrapin Tally and how can people get involved?

A: The Terrapin Tally is a citizen science project born out of a collaboration with NC Coastal Reserve. Two other colleagues and I were looking for a way to determine the relative abundance of terrapins around the Masonboro Island Reserve by using head-count surveys. Even in the relatively small area around Masonboro (compared to the entire state), the three of us couldn’t possibly cover the area effectively. So we looked to a tool that has been successful for monitoring sea turtles in NC: citizen science! The concept is to get many volunteers to cover a widespread area, looking for terrapins and using their smartphones to enter observations. This approach gives us a snapshot of the relative number of terrapins across the Masonboro Island Reserve. The volunteers paddle through estuarine creeks in their kayaks, looking for tiny terrapin heads poking out of the water. They enter their observations through a mobile application on their smartphones. This is the third year of the Terrapin Tally around Masonboro, and we continue to try to improve. We are looking in the future to develop a better data collection application and to expand the effort across the state. 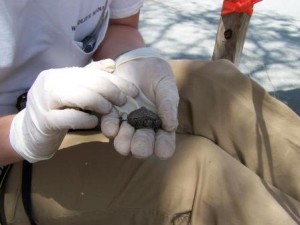 Revisit our last blog on diamondback terrapins to brush up on your terrapin knowledge. Can you think of some differences and similarities the terrapin and sea turtle have? Speaking of sea turtles, this week Turtle A weighs 1238 grams and measures 20.0 cm long. Turtle B weighs 1196 grams and measures 18.8 cm long. Learn more in our Hatchling to Yearling lesson plan. Thank you to Sarah for an awesome post! 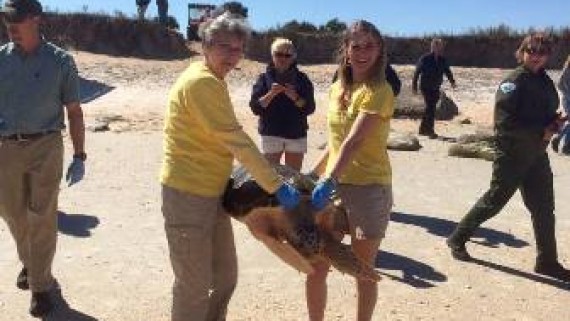 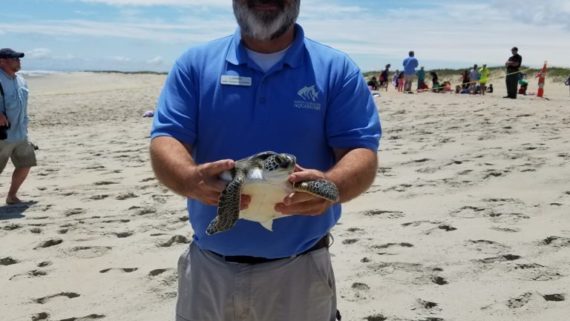 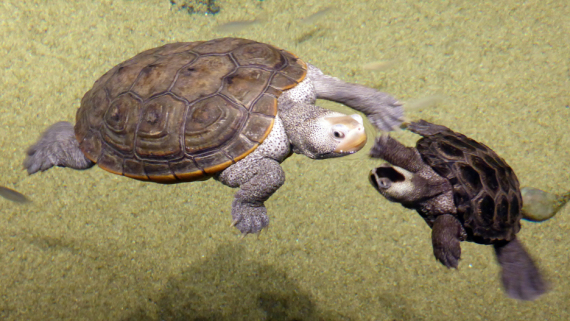 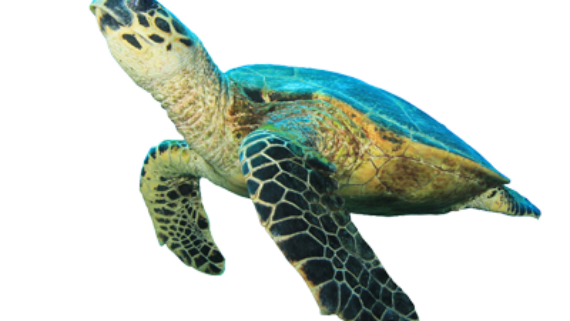 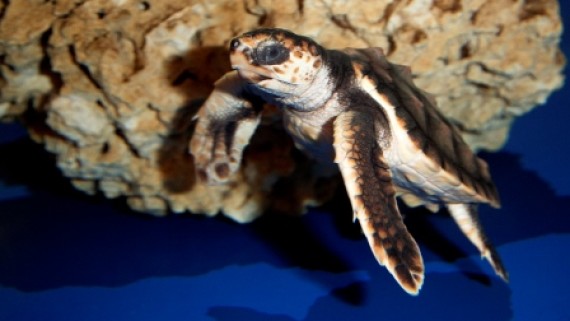