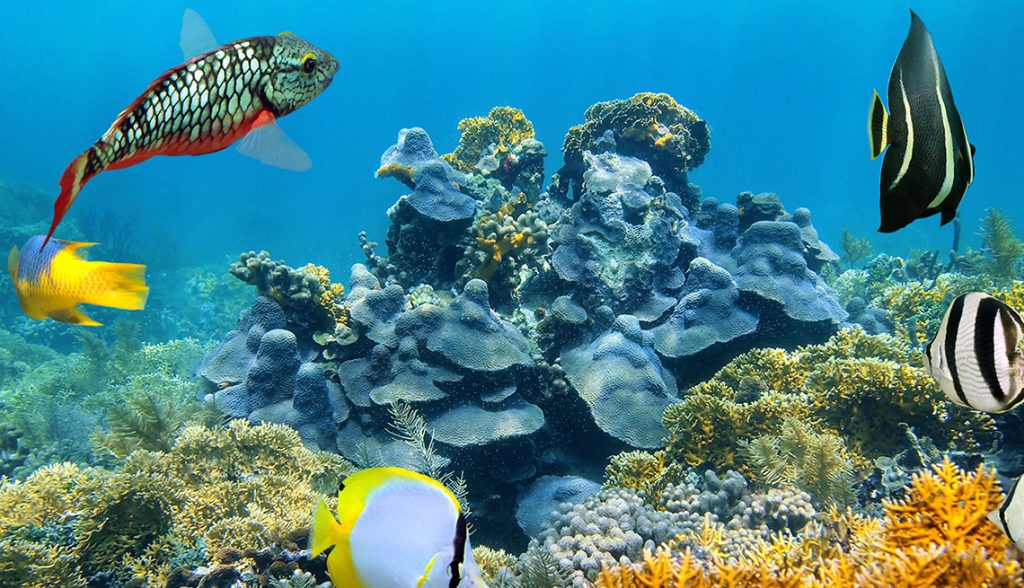 I recently had the opportunity to travel to Central America as an Educator of Excellence for the Tropical Ecology Institute. This course is facilitated by the Museum of Natural Sciences in Raleigh and takes twelve North Carolina educators to Belize to experience different ecosystems and cultures. North Carolina and Belize are separated by more than 2,000 miles; however, there are many similarities between the shared species.

During the 10-day trip we spent some time among Maya ruins, waterfalls, caves and a jaguar preserve. While I loved exploring the different forest habitats in the country, my heart belongs to the ocean. As an Aquarium educator, I was very happy when we finally made it to the coast. We spent the last third of the trip on a small island in the Caribbean as our home base to travel to and from the Belize Barrier Reef. The Belize Barrier Reef is part of the Mesoamerican Barrier Reef System (MBRS), which stretches from Mexico to Honduras. The Belize Barrier Reef makes up about 80% of the MBRS and is the largest barrier reef in the Northern hemisphere and second largest in the world.

There were many connections to be made between North Carolina and Belize, including a hilarious run-in with a raccoon. But the reef was where those connections hit home for me. Snorkeling among the corals, sponges, and sea fans was exactly like looking into the Aquarium’s Sharktooth Ledge habitat. I spotted sergeant majors, butterflyfish, filefish, angelfish, a few trunkfish, and even a sand tilefish. I was reminded that the warm Gulf Stream brings tropical fish north to the hardbottom reefs off the North Carolina coast. 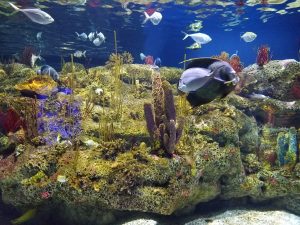 In addition to the plentiful fish on the reef, we were also lucky enough to see a sea turtle. A hawksbill turtle was tucked under a ledge, so we could just make out its beautiful, tortoiseshell-colored carapace. Hawksbills are known for their narrow beaks used to eat sponges on reefs. Consuming these primitive animals makes the turtle meat toxic to humans. Unfortunately, humans use their shells to make various items like jewelry and ornamental boxes.

Hawksbills are classified as endangered and we were careful to keep a respectful distance from the turtle while also enjoying its presence. Hawskbills are not one of our common sea turtles but they can be spotted occasionally off our coast.

Not everything on the reef was a welcome sight, however. Upon close inspection of a crevasse, we noticed a lionfish hiding out. Lionfish are native to the Indo-Pacific but are an invasive species now found both in the Caribbean and the Atlantic. With long venomous spines, they outcompete native fish and reproduce unchecked as they have no predators in these waters. In Belize and North Carolina, efforts to reduce the species include lionfish spearfishing tournaments. Lionfish is also becoming a more popular seafood item on restaurant menus. I even purchased earrings made from lionfish spines to support local artisans and the conservation of the reef. 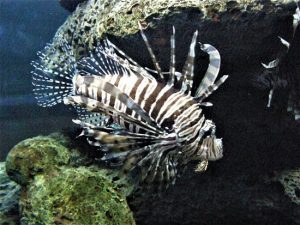 One of the lionfish we care for at the Aquarium

While I am happy to be home, the trip to Belize was one I can look back on as rewarding, both personally and professionally. We have more in common with others than we may think and it is important to remember how interconnected we are.

Another thing I find rewarding is keeping track of our turtles here at the Aquarium! Our yearlings are so big now and they are scheduled to be released soon as long as ocean conditions are right. Turtle A is 4863 grams and 31.6 centimeters while Turtle B is 4706 grams and 32.2 centimeters. To see how the new hatchlings are growing, visit this post. 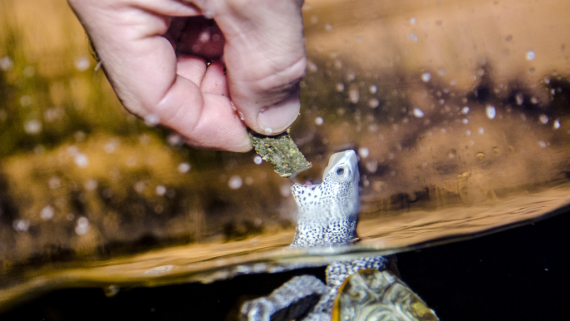 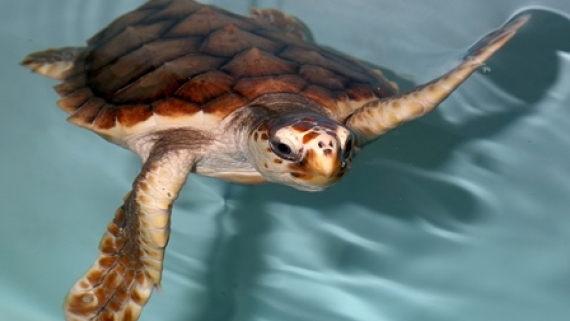 From Hatchlings to Yearlings

Welcome to the Cape Fear River