Sea turtles are among the oldest surviving reptiles in the world. Fossil records indicate they have existed more than 150 million years. They are also the longest living vertebrates on Earth, with life spans greater than 100 years. 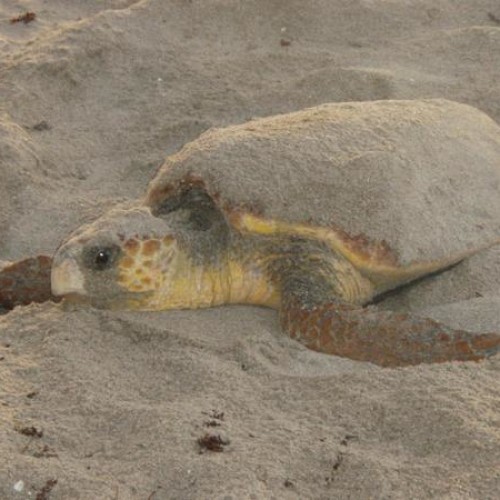 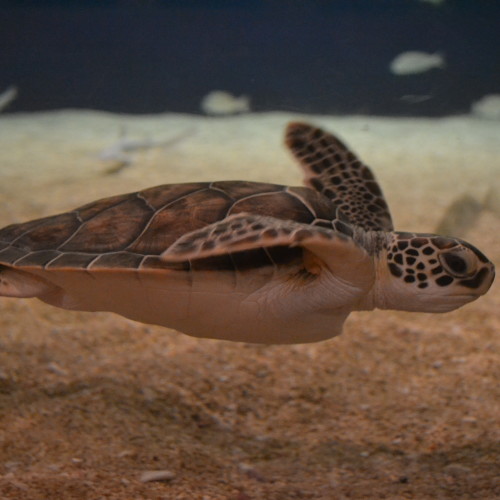 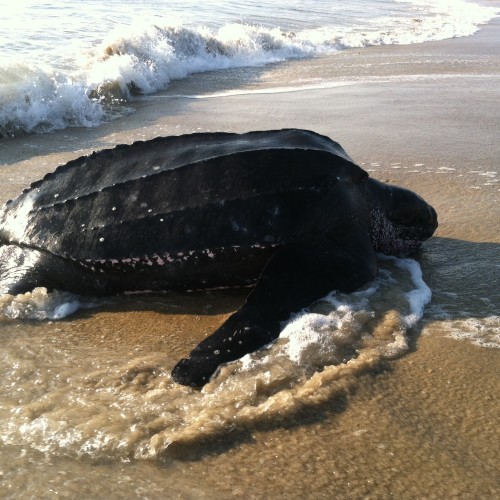 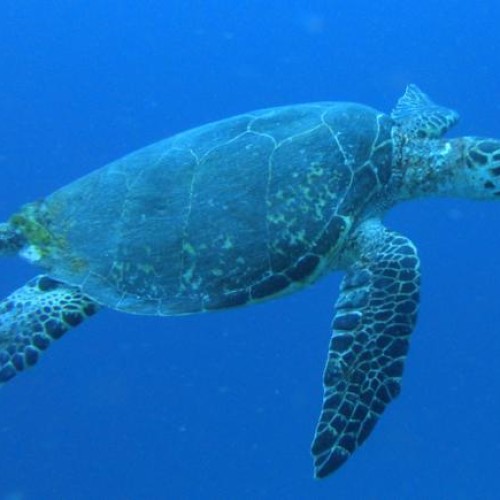 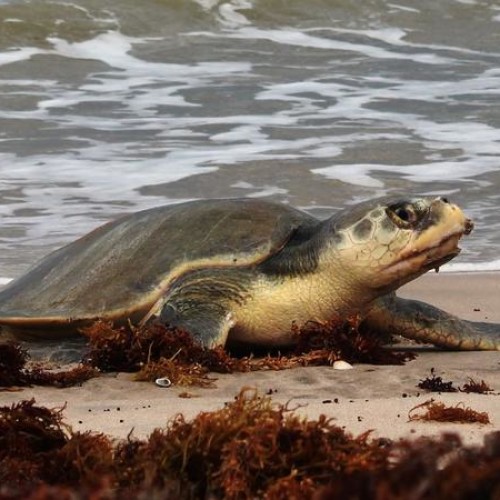 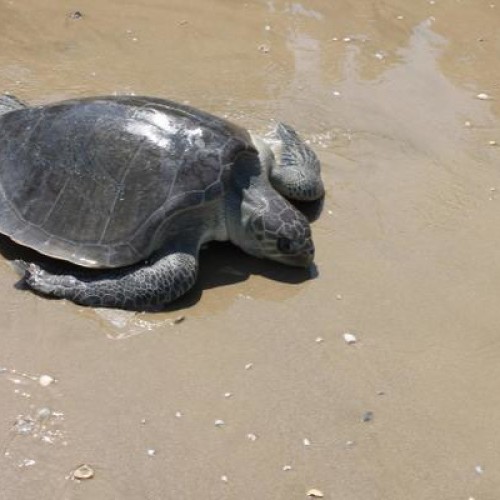 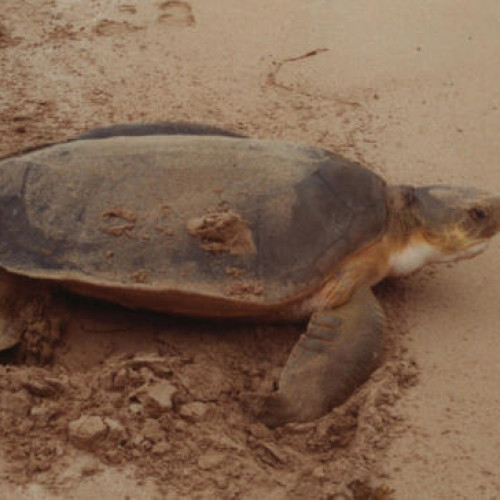 Although each of the sea turtles is unique, they share many general characteristics. Sea turtles are reptiles and therefore are ectothermic (cold blooded), lay eggs, and have scaly skin, claws and lungs. Unlike terrestrial turtles, sea turtles have flippers instead of feet. This allows them to move quickly through the water. To help them swim, sea turtles shells are very narrow and hydrodynamic. Because of their streamlined shape of their shell, a sea turtle cannot pull its head and flippers into its shell like a terrestrial turtle.

Like all turtles, sea turtles have no teeth. Their jaws are powerful and shaped like a bird’s beak. Most sea turtles are carnivores, eating crabs, sponges, tunicates, clams and other mollusks. A favorite food of most sea turtles is the jellyfish. Leathery projections line their throats and protect them from the sting of the jelly’s tentacles. Only the green sea turtle spends much time eating vegetables.

Sea turtles travel many miles between nesting and feeding grounds during the year. Some species have been known to swim up to 1900 miles in 23 days, against the current!

Once a male sea turtle hatchling leaves the beach, he will spend his entire life at sea. Females only come ashore to lay eggs. Scientists are not certain when sea turtles reach sexual maturity. With many reptiles, size is a more reliable indicator of sexual maturity than age. This is the case with sea turtles. It is estimated that female sea turtles become large enough to be sexually mature between 10 and 17 years of age.

Mating occurs in late spring and summer usually offshore from the nesting beaches. The females make their way onto the beach to nest. Using their rear flippers, they dig a nest about 18 inches deep. Females deposit about 80 to 120 leathery eggs about the size of ping-pong balls and then carefully cover the nest. Nests are usually identified by tracks (crawls) left on the sand as the female crawls up the beach. Females may nest several times in one season and then skip the next season or two.

After approximately 60 days, the eggs begin to hatch. Each hatchling breaks out of the shell using its egg tooth. The turtles will begin to wiggle and sand will fall around them, helping to lift them to the surface. Suddenly, a depression forms in the sand and the baby sea turtles “boil” out of the nest and rush to the ocean. Hatchlings that do not make the boil are often left behind in the nest. These are found when turtle rescue groups excavate the nest. Sea turtle hatchlings are about 2 1/2 inches long and weigh about 1 ounce at birth. They are thought to swim continuously for 24 to 48 hours, until they find floating rafts of sargassum to live on. Here they will shelter and feed until they are juveniles. Unfortunately, we know little more about where turtles spend their early years. When they are juveniles they move to the their permanent feeding grounds but for many species, we do not know where these are. 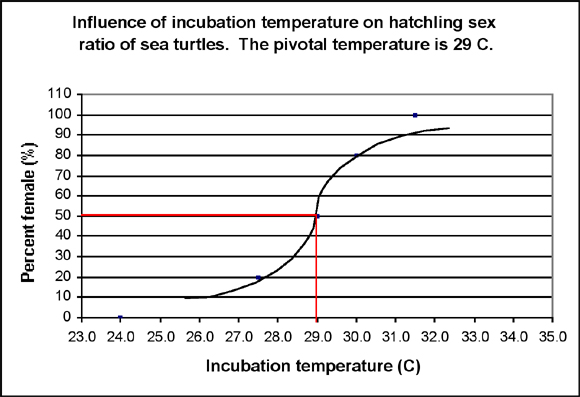 Five of the seven species are found along the North Carolina coast. The most common sea turtle in our area is the loggerhead (Caretta caretta). The others found in our waters include the green (Chelonia mydas), hawksbill (Erytmochleys imbricata), Kemp’s ridley (Lepidochelys kempi) and leatherback (Dermochelys coriacea).

A loggerhead sea turtle’s shell can reach 3-4 feet. They may weigh as much as 500 pounds, but 350 pounds is more common. They have a massive head. Sailors seeing the head poke above the surface to breathe would often mistake them for logs, so they named them loggerheads. Loggerheads tend to travel great distances. Tagged adults have been found thousands of miles from where they were originally marked. These turtles nest as far north as Ocracoke Inlet in North Carolina and as far south as Florida. Historically, they nested as far north as Virginia. Loggerhead and green sea turtles look similar as adults. It is possible to count the number of scutes on the shell to identify one from the other. Loggerhead sea turtles have five scutes down each side of their shell, whereas greens only have four.

As an adult, the hawksbill sea turtle can grow to 3 feet in length and may reach as much as 280 pounds. Its head is small with a narrow snout and smooth cutting edges. Its name, like the loggerhead, comes from the shape of its head. Hawksbill turtles are rarely seen in North Carolina. They prefer tropical reefs where they can eat small plants and animals that live within the reef system. They are endangered because their beautiful shells were once highly prized for jewelry and women’s accessories.

The Kemp’s ridley is the smallest of the sea turtles found in North Carolina. It only reaches lengths of 30 inches and weights of just over 100 pounds. It feeds mainly on crabs and mollusks, but is also known to eat other invertebrates and plants. The Kemp’s are known for their group nesting behavior called arribadas. This group of females will all come ashore in one day on one 4-mile stretch of beach in Mexico. There is only one confirmed Kemp’s ridley arribada and it is in the state of Tamaulipas, Mexico, where nearly 95% of worldwide Kemp’s ridley nesting occurs. The three main nesting beaches in Tamaulipas, Mexico are Rancho Nuevo, Tepehuajes and Barra del Tordo. Nesting takes about 4-6 hours, and there may be as many as 10,000 females laying nests at one time. Nesting also occurs in Veracruz, Mexico, and in Texas, but on a much smaller scale. Occasional nesting has been documented in North Carolina, South Carolina, and Florida. The Kemp’s is the most highly endangered reptile in the world.

Leatherback sea turtles are the largest turtles in the world. Their shells may be as long as 4 to 6 feet. Leatherbacks can weigh from 650 to 2,000 pounds as adults. The leatherback’s shell does not have bony scutes like other sea turtles. Instead they have an irregular arrangement of small bones covered by a thick, dark brown or black leathery skin. Their shell has several ridges running from head to toe. There are seven on the top and five on the bottom. Leatherbacks are considered a warm-water species, but many have been sighted as far north as Nova Scotia and Newfoundland. Occasionally they will nest as far north as North Carolina. Females lay nests containing as many as 170 eggs, but half or more of those are usually yolkless (infertile). Like all reptiles, leatherbacks are cold-blooded but unlike most reptiles, they are able to maintain a body temperature above the outside environment. Muscle movement generates heat and thick layers of fat insulate the body against heat loss. This allows leatherbacks to live in much colder water than other sea turtles.

All sea turtles are listed as endangered or threatened. Many factors have contributed to their population decline:

In North Carolina there is a sea turtle stranding and salvage network. Volunteers all along the coast of North Carolina man this “network”. Stranded sea turtles are evaluated for illness or injury. Live turtles may be taken to the sea turtle rehabilitation hospitals such as the Karen Beasley Sea Turtle Hospital in Topsail Beach. Sea turtles that do not survive are studied. The information gathered is used to help scientists learn more about sea turtles and how to do more for them. During summer months, volunteers walk the beaches in search of sea turtle nests. These nests are marked and checked frequently. Some of the Sea Turtle Project volunteers “sit” with the nest as it hatches to help protect the hatchlings as they journey seaward. There are also many volunteers and organizations, like the North Carolina Aquariums, that teach the public about sea turtles and their conservation. 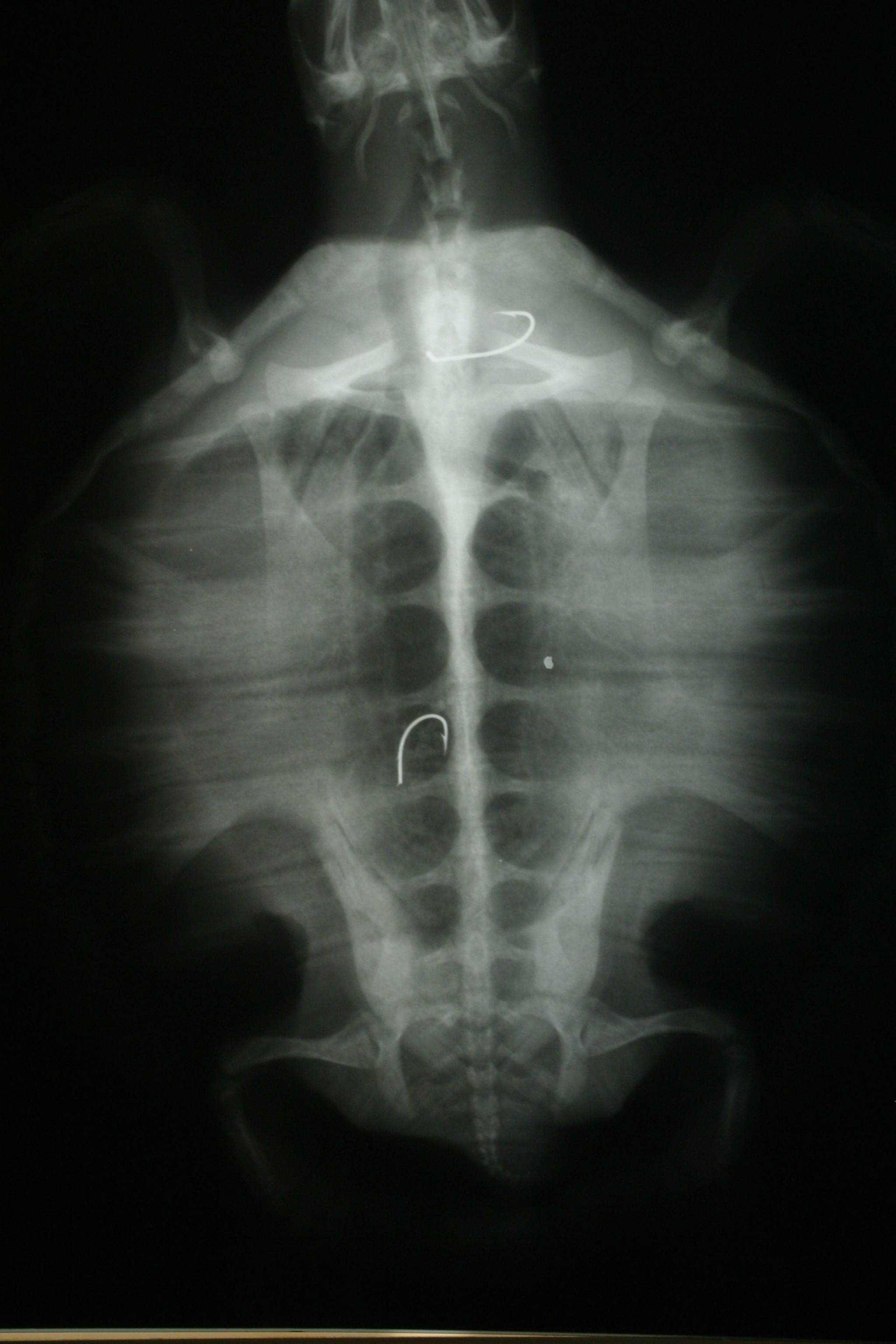